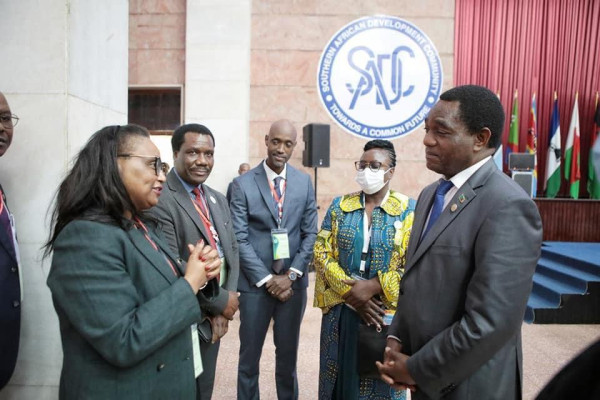 Tshabalala attended the 42nd Ordinary Summit of Heads of State and Government of the Southern African Development Community (SADC) which closed in the Democratic Republic of Congo’s capital, Kinshasa last week.

Tshabalala said: “The African Development Bank Group is highly optimistic about the future of the SADC region. Although the pandemic and food crisis challenged the region in ways no one expected, regional cooperation in investment, security, infrastructure, health, climate, agriculture, and trade is accelerating at an impressive pace. Those trends are creating new opportunities to strengthen the region’s productive systems and to upgrade urban and regional infrastructure.”

The senior vice president held fruitful discussions with several ministers and heads of state, including President Hakainde Hichilema of Zambia and President Lazarus Chakwera of Malawi. Both presidents expressed their gratitude for the support provided by the bank group over the years. They emphasized the critical role of the African Development Fund—the bank’s concessional lending window—in supporting their countries’ development efforts. Presidents Hichilema and Chakwera spoke of the urgent need to mobilize additional concessional resources. They called on the African Development Bank Group to accelerate implementation of its flagship financial initiatives, especially the amendment of the charter of the African Development Fund, to enable it to access the financial market.