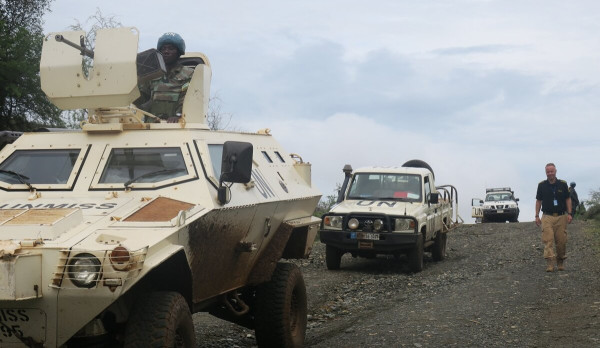 However, being a livestock owner isn’t easy, as the Toposa community of Kapoeta, Eastern Equatoria, reveal to visiting peacekeepers from the United Nations Mission in South Sudan (UNMISS).

Livestock thefts in Chomakori, Lochumur and Najie payams [administrative divisions] have left communities reeling. Some 1,500 people have been displaced due to conflict generated by counter raids and revenge attacks.

“When we lose our livestock, it makes it very difficult for us to make ends meet,” says Taban Lokaayi, a cattle camp leader from the Toposa community. “My family has personally suffered from these raids because now that I have lost my animals, I can’t afford to take care of them in any way,” he reveals.

For Epone Emmanuel Lolimo, County Commissioner of Kapoeta North, the only way to end persistent clashes is through peace dialogues.

“I am happy to see UNMISS visiting us,” he tells peacekeepers. “I speak for the residents of Kapoeta North when I say that we need to build bridges with neighbouring communities, share services, usher in a brisk and thriving trade in our markets as well as pave the way for future development. The current situation has led to a great deal of fear and instability, especially for women and children,” explains Mr. Lolimo.

His ask: for the UN Peacekeeping mission to identify possible modes of rapprochement among feuding cattle owners.

Francis Diu Shuei, a Civil Affairs Officer and part of the joint patrol on the ground, responded to Mr. Lolimo’s request.

“We are here speaking with all of you to not only to assess the security situation on the ground but also to evaluate how we can help you repair peace dynamics here. We are conducting similar meetings with all parties to these ongoing cattle raids and are travelling to Kapoeta East and South as well as Budi,” he revealed.

“Our aim is to engage continuously with all feuding communities and figure out possibilities of reconciliation which will stand the test of time. For development and financial stability, peace is the first step,” he adds.

As of now, relationships between neighbouring Buya, Murle, Tenet and Toposa communities remains bitter, following the recent cattle raids involving some 15,000 cattle that claimed many lives.

In Budi, Lino Mertula Lechuk, paramount chief of the Buya who are based in Kimotong and Napak payams, highlights what is, perhaps, the greatest threat of frequent livestock raids—youth involvement.

“Ever since young people from my community began joining in raids against our neighbours, we have suffered not only from violence but also from guilt. The older generation understands that violence only leads to loss. We want to reconcile with our Toposa brothers and sisters, and collectively ensure our young people begin embracing a culture of peace,” he states simply yet eloquently.

For its part, UNMISS is continuing to engage key community leaders, women and youth to reduce tensions and promote reconciliation activities.

Cattle raids are a key driver of intercommunal conflict in South Sudan.