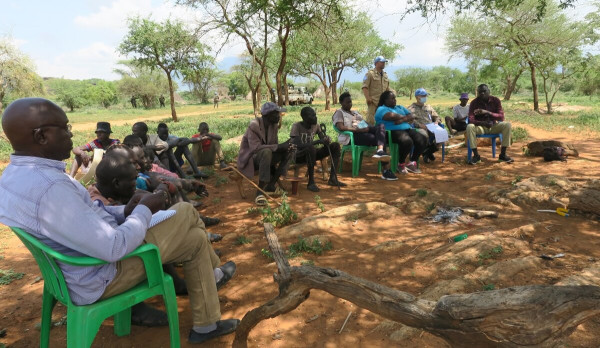 The past three months have been a trying time for communities living in Ikotos county in South Sudan’s Eastern Equatoria state.

Conflict sparked in April this year because of a cattle raid; since then, the populations of Ikotos Central payam [administrative division] and Romula, a boma in Chorokol payam, have been involved in a saga of counter raids and revenge attacks, which have claimed some 20 lives till now.

Normal life has been completely disrupted; many people have abandoned their homes and farms, fleeing to safer locations, including outside the country.

“We want our voices to be taken seriously when we say that there is an urgent need for peace initiatives here. Violence is never a solution and we have been fighting and killing each other for far too long. At a time when we should be united, our communities are more divided than ever,” states Michael Moga Olukatuwa, chief of Chorokol, passionately.

Michael was speaking to an integrated peace team led by the United Nations Mission in South Sudan (UNMISS) that recently visited Ikotos to assess the security situation and convene with community members.

“Historically, the people of Ikotos have always been peaceful and cordial with one another,” reveals Mario Odiongo, Chairperson of the seven communities in the county. They would travel safely and securely on roads as far up to Chahari and even Lobira villages. However, this has completely changed. We are now living in a very tense security environment and are mistrustful of each other. Conflict has destroyed our way of life,” he adds eloquently.

The visiting team, that comprised of UNMISS peacekeepers, representatives from the Commission for Conflict Resolution and Reconciliation and Ministry of Peace Building discussed with the community representatives the need to reach a common ground for an inclusive dialogue for peace.

“We will definitely take your concerns and share with government authorities, your leaders and partners to ensure that the current situation in Ikotos is resolved. Nobody should fear losing their lives and it is vital that reconciliation efforts begin as soon as possible here,” said Hercules Ayahu Abalu, Civil Affairs Officer, UNMISS.

The volatility in Ikotos has been exacerbated by the fact that no arrests have been recorded by local police and stolen cattle have, as yet, not been returned to their rightful owners. Ambushes are increasing on roads here, which led to two humanitarian workers being recently killed along the Ikotos-Tsertenya-Uganda border road.

Dialogue appears to be the only way to resolve differences and bring some amount of succor to suffering communities.

“We have to come together and speak to each other about our grievances,” says County Commissioner Joseph Loholong Jersio. “It is only through dialogue that we will arrive at mutually acceptable solutions to this dire situation. We need to build peace now to make sure our children do not suffer anymore.”