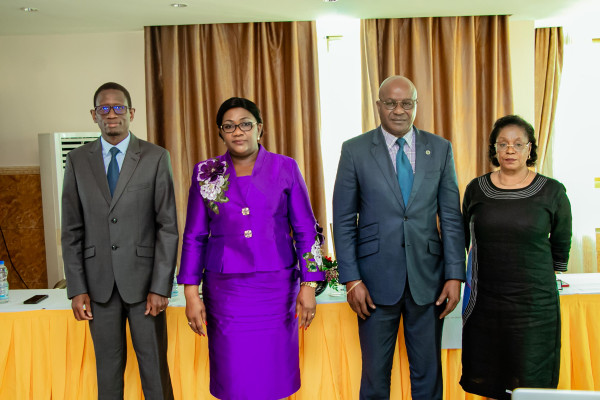 The African Development Bank Group (www.AfDB.org ) and the Gabonese government held national consultations from 20-23 June, on the Country Diagnostic Note and the 2016-2022 Country Strategy Paper.

Discussions were held between a delegation led by Bank Country Manager for Gabon, Nouridine Kane Dia, and a government delegation headed by the Minister of Economy and Recovery and Governor of the Bank for Gabon, Ms. Jeanine Lydie Roboty. Representatives of the main ministries and technical departments involved also participated.

The African Development Bank Group’s Managing Director for Central Africa, Souleymane Koné, welcomed « this consultation process which should lead to the adoption of the Country Strategy Paper which will consider Gabon’s strategic and priority options at the macro-economic and sectoral levels ».

Ms. Roboty thanked the Bank « for accompanying Gabon in implementing its programmes. It is a matter of establishing a solid framework for the concrete implementation of our projects to meet our needs, » she said, stressing the synergy between the country’s various development partners, including the World Bank.

The consultations highlighted Gabon’s economic opportunities. The country has immense natural resources, notably oil, of which it is the fifth largest producer in Africa, manganese (the world’s second largest deposits), gas (reserves estimated at 26 billion cubic feet), and the 22.5 million hectares of forests that cover 85 percent of the country. The decline in oil reserves is pushing the country towards greater diversification of its economy.

The Bank, through the implementation of the Country Strategy Paper for 2016-2022 has helped improve the use of secondary forest species. The business environment has also improved. In addition, the Bank’s budget support has contributed significantly to the country’s fiscal stability, and the emergency programme put in place in response to the COVID-19 crisis has helped strengthen the health system and mitigate the pandemic’s socio-economic impact. In addition, efforts to provide drinking water to the capital, Libreville, are well underway and expected to be completed by the end of 2022.

Over the next five years, expected challenges include access to electricity, diversification of the economy, the establishment of key catalysts for private sector development. The previous Country Strategy Paper has undergone some adjustments. The 2023-2027 strategic objectives focus on two pillars: support for economic diversification through infrastructure development and improvement of the business climate, and support for the human development strategy.

The revised Country Strategy Paper aims to achieve several results: developing infrastructure and agricultural value chains, improving public finances, and improving the business climate. The strategy  also aims to diversify training so that workers skills better match the job market and to improve living conditions. Structural transformation must be driven by the agricultural and timber sectors, regional integration, internal and external connectivity, and the private sector.

Praising the constructive nature of the discussions, African Development Bank Country Manager for Gabon, Mr. Nouridine Kane Dia, said: « The Bank is pleased that its detailed analysis of the country’s context has been unanimously shared by representatives of the government, the private sector and civil society. We also appreciate the strong convergence of views on the seven proposed priority areas for reform. This provides a good basis for continued dialogue and collaboration with all stakeholders in the lead-up to the consultations on the next Country Strategy Paper 2023-2027.”

The revised Country Strategy Paper will be submitted to the Bank’s Board of Directors for approval.

As of 31 May 2022, the African Development Bank Group’s active portfolio in Gabon comprised ten projects with a total value of €671 million. The investments are primarily in the governance, agriculture, water and sanitation, social, and transport sectors.