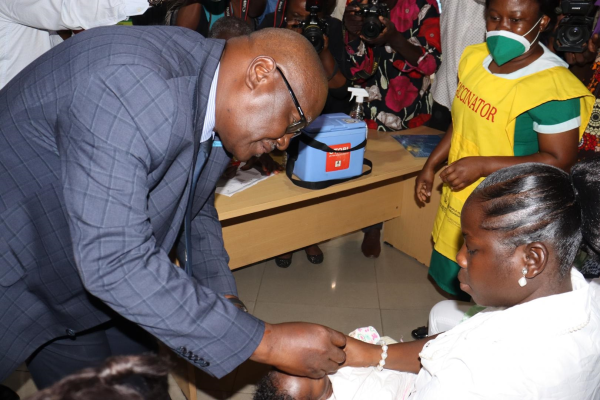 The Government of Ghana, with the support of the World Health Organization (WHO) and other partners of the Global Polio Eradication Initiative (GPEI), has rolled out a polio vaccination campaign, targeting children under five years across all 16 regions of Ghana. This follows the confirmation of circulating vaccine-derived poliovirus type 2 (cVDPV2) in the country from two acute flaccid paralysis (AFP) cases; one each from North Gonja District in Savanna Region and West Mamprusi in North East Region.

The campaign, which is scheduled for 1 – 4 September 2022 for the First Round and 6 – 9 October 2022 for the Second Round, is expected to increase population immunity against the Type 2 Poliovirus and break transmission of the disease. Over six million children across the country are expected to receive the novel Oral Polio Vaccine Type 2 (nOPV2) for each of the rounds.

Speaking at the launch of the campaign, the WHO Representative in Ghana, Dr. Francis Kasolo underscored the need for enhance polio surveillance and proactive response to curb the outbreak. He further called for a broader coalition of all stakeholders to fight against polio and other public health emergencies.

“This campaign marks a key milestone in our quest to contain the ongoing polio outbreak in Ghana. The tools for halting transmission of polioviruses have stood the test of time. Therefore, we must all join the fight against the polio outbreak and other public health emergencies by saying no to misinformation”, added Dr. Kasolo.

The nOPV2 vaccine is a next-generation version of the monovalent Oral Polio Vaccine (mOPV2) and has been shown to be safe and effective in protecting against type 2 poliovirus while being more genetically stable and thus decrease the likelihood of cVDPV2 emergence in low immunity settings.

On his part, the Deputy Minister for Health, Hon. Mahama Asei Seini noted that despite the significant efforts towards the eradication of polio, many children are still at risk of the virus and pledged government continuous partnership with the (GPEI) to make the fight a success whilst urging the general public to support the immunization campaign. “I am encouraging all caregivers of children under five years to ensure that no child is left out in this immunization campaign”, said Hon. Seini.

Whilst highlighting the critical role of vaccination in the prevention of polio, the Deputy Director General of the Ghana Health Service, Dr. Anthony Adofo Ofosu encouraged all to keep the environment clean and maintain good personal hygiene. “We should, at all times, remember to wash our hands with soap under running water before and after handling a child, preparing food, eating, feeding the child, and after visiting the toilet. We should also train the children to do same or help them do same”, He added.

WHO and other GPEI partners have supported government with financial, logistical, and technical support to reach and vaccinate all eligible children across the country

Distributed by APO Group on behalf of World Health Organization (WHO), Ghana.