Rule of law in Rumbek gets a boost, thanks to an UNMISS-led infrastructural intervention 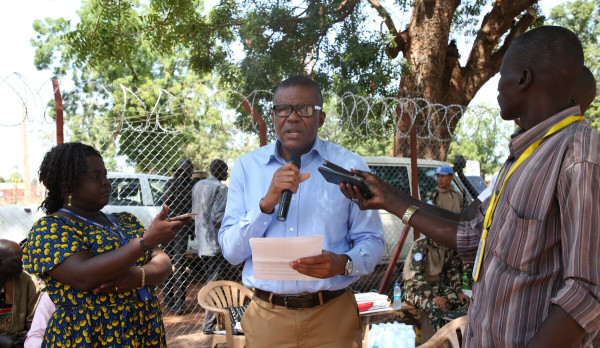 Till recently, people seeking recourse for crimes committed against them at the Rumbek Public Prosecutor’s office, seemed to have entered a grim reality.

The building was rundown. Paint was peeling off cracked walls and cobwebs frequently brushed against the heads of residents who needed legal help.

Originally built in 2011, this office, despite its shabby appearance has been a mainstay in the lives of communities, settling complex criminal cases in inclement weather conditions.

In summers, the jampacked rooms were unbearably hot; during the rainy season, the thin roof leaked copiously.

Yet dedicated justice officials did their best to make sure the law was upheld and have been instrumental in preventing cycles of violence, though the conditions have impacted their effectiveness.

All that changed when the United Nations Mission in South Sudan (UNMISS), recognizing the critical role played by this office in the lives of community members, renovated the entire building and furnished it.

The logic behind this intervention is simple, according to the UN Peacekeeping mission’s John Oziegbe, team leader of the Human Rights Division in Rumbek.

“If the State Prosecutor’s office continues to have a huge backlog of cases because it lacks a proper structure that provides prosecutors with the needed space and facilities to do their job, it results in delays in the justice process,” he explains. “The associated ripple effect—increase in armed attacks; cattle raids, theft, and violence against women. All these lead to insecurity and threats to civilian life,” he adds. “Therefore, this small-scale assistance by UNMISS feeds into the larger goal of sustained peace in Lakes and across the country.”

For Peter Maliab Chieny, the Mayor of Rumbek town, there is a bonus. “Previously, many people wouldn’t report crimes because the structure and appearance of the Public Prosecuter’s Office didn’t inspire trust. With this new building, that has changed. Everything is light and airy; it emboldens us to have more faith in the legal system, and ultimately, will contribute to upholding law and order for all,” he said eloquently.